About CTS
Know the arrival time of the next Bus or Tram!
See or download timetables
Network maps
Display traffic information
Our fares
NEWS
Link to the RSS news feed
Corona Crisis: New rules for the use of the CTS network
Follow us on the social networks !
Facebook and Twitter
ALL NEWS

CTS has placed sustainable development at the heart of its activities and practices. It aims to continually improve public transport for the population of Greater Strasbourg, whilst keeping costs under control.

It also contributes to the development of a city that respects an environmental equilibrium. Finally, this endeavour also serves the citizens’ interests, as it channels the company’s resources into its development policy, facilitating access to mobility for everyone and fostering a community spirit within the urban transport area of the Strasbourg Eurométropole.

Download the presentation on CTS’ sustainable development strategy (in French): 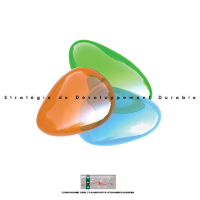 To find out more about TRANSPORT SERVICE CARBON EMISSIONS, click here : (In French.)

Promoting biodiversity at the heart of the city

CTS is continuing to pursue its commitment in the environmental chapter of its sustainable development policy by also engaging in the promotion of biodiversity in the urban environment.
CTS has for many years pursued an active and ambitious policy in the area of environmental protection. This commitment has, since 2015, translated into initiatives to promote biodiversity in the city. For example an insect hotel and three beehives managed by beekeepers from the association Asapistra have been set up in the Kibitzenau depot.
By contributing to the protection of bees which are currently endangered, CTS is joining a movement which is both global and local in aid of the environment. The city of Strasbourg (and by extension, the Greater Strasbourg area) is acknowledged internationally for its eco-friendly approach as demonstrated by its label “French Capital of Biodiversity”.
In this respect, the city has drawn up a charter entitled “United for more biodiversity” (Tous unis pour + de biodiversité) which aims to pay tribute to and assist in their environmental initiatives companies and public space stakeholders which contribute to the preservation of nature in the urban environment. To become signatories, applicants must comply with at least six criteria from a list of fifteen established by the local authority. Qualifying thanks to its eight initiatives, CTS signed the charter on 7 July 2015.

Eight initiatives commended by the charter “United for more biodiversity”
* abandon of chemical herbicides to kill weeds
* use of alternative techniques for this type of maintenance
* reduction of mowing, down to two operations per year.
* flower beds mulched to reduce watering
* introduction of a meadow for honey bees
* presence of fruit trees
* installation of an insect hotel
* installation of beehives.

The tram system inaugurated in Strasbourg in 1994 was the first to have vehicles equipped with low floors throughout, ensuring easy access for wheelchairs and also pushchairs. Each station is announced via both a public address system (for the visually-impaired) and displayed on a screen. 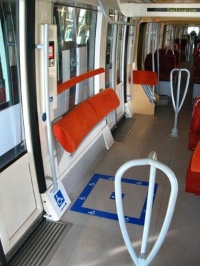 This comprehensive policy of transport accessibility for all is ongoing, and is reflected in improvements to the existing public transport network.

Surpassing legal requirements, all new CTS buses are equipped with two areas reserved for wheelchairs and a tram-style door to facilitate boarding.

Travel conditions for people with reduced mobility are also improved through a public address system to announce stops.

Scrolling screens display the next stop and the direction of the vehicle at all times.

As standards have evolved following the entry into force of the 2005 law, all existing buses are being gradually refitted to meet the required norms. For example, stop request buttons have been placed at the new mandatory height.

Finally, all stops on the bus network are being gradually redeveloped, in accordance with a charter jointly drafted by the public transport authority, the operator CTS and associations representing the disabled.

This charter defines:
- the kerb height, in order to facilitate the boarding and alighting of wheelchairs and people who experience difficulties in moving around (with a walking aid for example);
- the widths of aisles that should remain obstacle-free and the measurements of the turnaround area required for wheelchairs;
- tactile strips allowing the visually impaired to locate the edge of the kerb;
- the presence of an approach guide line to help the bus to park up as close as possible to the kerb. 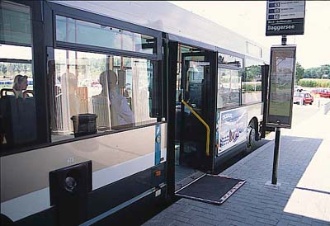 Efforts continue to be made in order to provide an accessible network to as many people as possible, whether those with a permanent or temporary disability, travelling with small children etc.

CTS sets up and runs partnerships with external organisations aiming to improve the understanding acceptance of rules applying to the use of public transport in the metropolitan area. 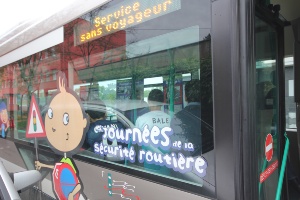 The objective is to maintain a permanent dialogue with young people and adults, inform them, in particular with regard to safety issues, and encourage them to adopt behaviour in accordance with public transport regulations.

Our approach to art

When it decided to modify the appearance and fittings of its new buses in 2011, the main aim of CTS was to save money.

However this step also led CTS to invent another way of demonstrating a sense of corporate citizenship.

New buses are now wrapped with the works of artists from Strasbourg or with close connections to the city, with close attention paid to alternating between promoting heritage and discovering new artists. 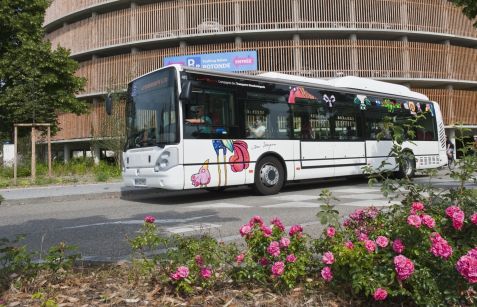 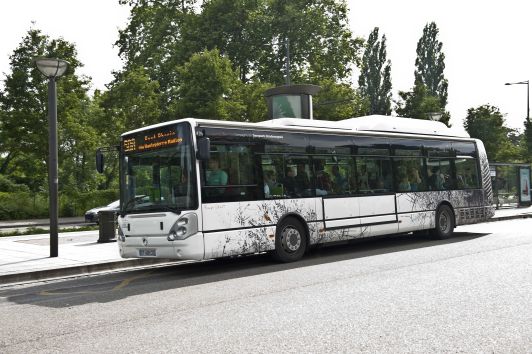 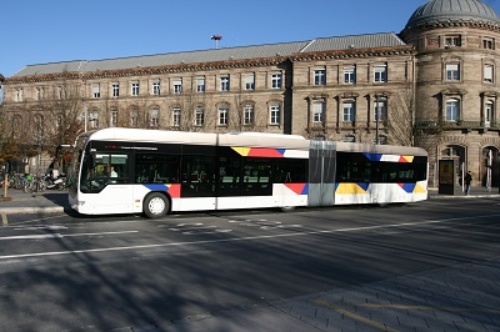 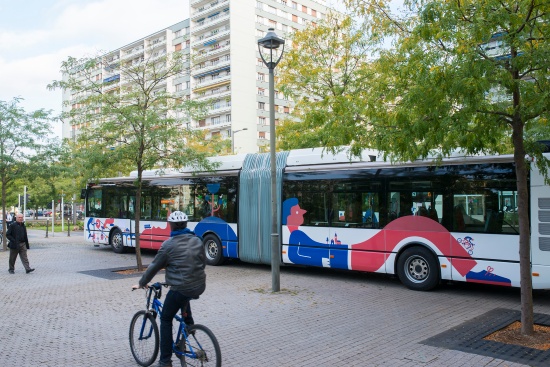 A tram designed by Schuiten

As part of a partnership with the City of Strasbourg and the “digital workshop” Shadok, the Belgian architect Luc Schuiten was appointed to design the wrap of a tram. Running on line A since its introduction on 20 July 2015, this vehicle depicts what the city of the future could look like in the perspective of environmental protection. “I wanted to represent what the future might hold for us in terms of transport because it is important to invent new ways of getting around without exhausting natural resources,” adds the artist.